I'm sure this is how the meeting went down in Marketing… 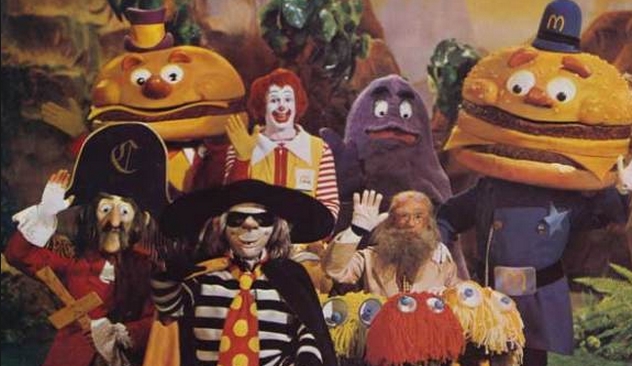 A: Okay, so we’ve got a colorful cast of characters to help promote our burger chain, let me introduce them to you. First we’ve got the chief mascot Ronald McDonald, he’s a clown.

B: A clown—okay, so a circus theme. Cool. So this guy with the top hat and fancy suit is the ringmaster.

A: Yes, Mayor McCheese. And this is Big Mac, he’s the chief of police. Then we’ve got the Hamburglar here…

B: Okay, sure, not a circus, a village. With a little slapstick crime problem. I’m with you.

A: …and Captain Crook, the pirate.

B: …a seaside village? I guess…

B: At the burger place.

A: We hear people up in New England like them.

A: COLORFUL CAST OF CHARACTERS.

B: Okay, okay! Speaking of colorful, who… err, what… is that?

B: And he’s purple because…

A: Well, they’re frosty shakes, right?, so they might give you a bit of a chill, so he’s sort of blue, err, purple with cold from eating all the tasty shakes he loves…

B: FINE. You’re promoting your tasty frosty shakes with a purple blob whose name means “an expression of distaste.” Fine. Anyone else? You’ve covered burgers (three times), fish sandwiches, shakes, and the clown who thinks it’s a good idea to come here for dinner, what are you missing… oh how about french fries?

A: Yes, we have fries! Produced by… the Wizard of Fries! See, here he is with his creations, the Fry Guys.

B: …Well. Now all this makes sense. A wizard did it. And by wizard, clearly we mean a drugged-out hippie.

A: …well, I do kinda have the munchies now…