Yesterday I happened to learn that The Fading Collection are playing a show tonight at Nectar, so I thought great, I'll go see that for my March show. But I've had a sneezy, runny nose the past several days, apparently some kind of springtime allergy, and today it's just rendered me all but helpless. It's so stupid, it's just a runny nose, but it won't stop running and tickling and sneezing and dripping all over my shirt and making my eyes water and feel itchy and grarrh rarrrh arrrgh make it stop!

And Dawn just called to see if I wanted to play a board game, which I'd love to, but I just don't feel competent to do much of anything - I certainly don't want to spend time with her (or anyone) when I'll just be constantly blowing or mopping my nose. I don't even feel competent to drive to the store to get some allergy medicine - I can't drive when I can't go more than a minute without dealing with my nose.

It's not so bad or serious of course, like my dad who's now in rehab to build up strength so he can get out of a chair or bed on his own again, or someone living without her thyroid as a completely non-random example, but it is maddening. Apparently it's also hard work, as I'm feeling really hungry even though it hasn't been exceptionally long since I ate lunch.

I called Tony earlier to see if he could bring me some allergy medicine, hopefully he'll be able to do that - and also get tissues, before this box runs out.

Meanwhile, Nimiel's had a reoccurrence of whatever was bothering her last spring, making her go to her litterbox repeatedly. I noticed the signs of this (unusual amount of litter scattered on the floor) last Friday evening, and sure enough on Saturday observed the repetitious behavior. So I brought her to the vet Monday and they gave her the same medication as last time; once she's done with the medicine in a couple weeks, they'll test her for signs of a urinary tract infection. Hopefully this time we'll avoid the other incidents of her throwing up and whatnot.

I note that, curiously, her first bout with this problem happened to coincide with my anxiety problems last year, and this reoccurrence has happened very soon after my recent bout of anxiety. I see no reason to think there's an actual connection, but it is peculiar.

Okay, I must make some soup for dinner. And you must admire this recent photo of Nimiel: 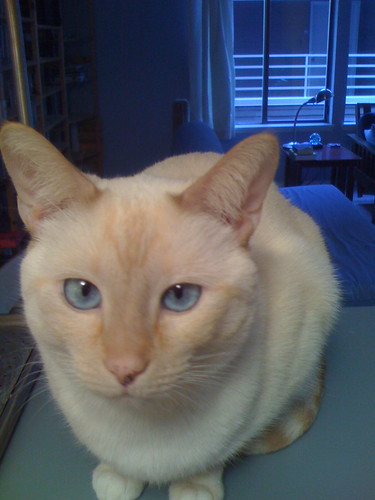