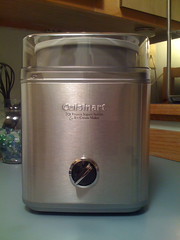 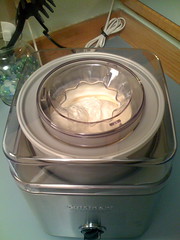 For my birthday (back at the end of December), my friends Tony and Farida got me an ice cream maker. I'd been thinking for a little while about getting one, but of course I never would've got around to it as soon as this. These photos are from mid-January, when I made my first batch - vanilla of course, since it's important to start with the basics. So far I've been using the recipes that came with the machine, and I've made the simple vanilla and chocolate recipes as well as the more complicated versions that involve making a custard first (this apparently is the French style of making ice cream, and is the "French" in French vanilla).

I started getting experimental with my most recent batch. I'd had cream sitting in my fridge for about a week and I was getting worried about it spoiling. So I decided I'd just make the simple vanilla (cream, milk, sugar, vanilla extract) recipe, since it was quick and I could use up the cream. But there's a local ice cream place that sometimes has lemon vanilla ice cream, which is really good, and I had lemon juice on hand. After looking up a couple lemon ice cream recipes online, it seemed I could just dump lemon juice into the mix and be good to go, so I did. Then for good measure, I added coconut. It came out really yummy.

I've been wanting to make coffee ice cream. The recipe that came in the booklet is an almond coffee butter recipe that calls for "espresso powder" for the coffee flavor. I think that's instant espresso, but I'm not sure. I have ground coffee that never gets used and I'd like to use that up rather than throw it out, but I think that I can't simply substitute coffee grounds into that recipe, because for one thing I don't think you're supposed to eat grounds and for another I'm sure the proportions are all different. So I need to find another recipe to use.

Another thing I want to try is making fudge swirl or something similar. I think that's as simple as pouring the syrup in to the mixer in the last five minutes, but I'm not sure. That'll be an experiment. It'd also be fun to do a two-flavor mix, but I think I need a second freezing bucket to do that, as I would need to mix the second flavor right after the first one so that I could swirl them together while the first batch was still soft.

I believe the net effect of having the machine is that I will eat less ice cream. Now that I have the machine, it feels wrong to buy mass-produced ice cream at the supermarket, so when I finish off a batch, I'm out until I decide on my next flavor, get the ingredients, and make it. That means I may go a week or so without ice cream, whereas before it'd usually be a couple days at most before I was picking up more at the store. Additionally, I feel like I'm eating better ice cream, since I'm only using fresh ingredients. So I'm pretty happy to have the machine. Yay ice cream!
Collapse